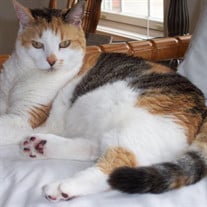 Our son Matt found Annie along a country road in Coweta County, on a dark Saturday night, in late May 2004. He put her in a cardboard box and brought her home. Annie was named Annie by my wife's mother, who said she was just like little orphan Annie. We took her to the Vet in a few days and she weighed about 7-8 oz. (being very malnourished), and was 3-4 weeks old. We had to feed her out of a eye dropper when she first came to live with us. However, she grew up to be a beautiful cat and reached a peak weight of 12 lbs. She developed hyperthyroidism (around age 9) and triaditis (about age 14) and had to take daily medications for those illnesses. She crossed the rainbow bridge on May 24, 2022 at 4:12 pm. She lived to be 18 yrs old. Annie liked: Licking mayonnaise and cheetos from your finger. She liked margarine too; off a plate. Food: Mostly seafood flavored wet and dry food. Dry food (Iams) for the early part of her life. Dry seafood Fancy Feast later. Then assorted wet food, and a mix of the two. She wasn't a lap cat, but liked snuggling at night as I read, or watched TV. She liked to watch and chatter/bark at birds, and squirrels. Her vocalizations were mostly under-her-breath trills and moans. Meowing occasionally. She liked sitting in the window looking outside thru the screen, sniffing the wind. She liked searching for and eating small bugs in the house. She would purr and knead my bath robes for long periods, eventually wearing holes in them. When she was a kitten she would readily play and "bow up" at you; jumping sideways at you, her little tail looked like a hair brush. She would go get pinkie and moan when lonely. Leaving pinkie in the middle of the floor. She used to "spank her monkey" toy when she was little. When she was young she would go outside and ask to go outside by going to the door. As she got older she would only go out if you went out on the patio with her. Otherwise, she wanted the door cracked open so she could sit by the door but not go out. She was very afraid of thunder at first, then just rain by itself would cause her to go in to hiding. Of course she was afraid of vacuum cleaners and a broom, too. She liked to hide under covers on the bed sometimes. She liked laying and sleeping in the sun. She liked laying and sleeping under the Christmas tree. She liked playing with paper and would make noise when she batted it. Likewise when she was young she would batt dry food pieces across the sunroom floor then chase it and eat it. She liked sleeping on her back with her front paws up in the air, sometimes. I called her “sugar bear” or Annie Mae. She will be remembered and loved forever.

Our son Matt found Annie along a country road in Coweta County, on a dark Saturday night, in late May 2004. He put her in a cardboard box and brought her home. Annie was named Annie by my wife's mother, who said she was just like little orphan... View Obituary & Service Information

The family of Annie . created this Life Tributes page to make it easy to share your memories.

Our son Matt found Annie along a country road in Coweta County,...