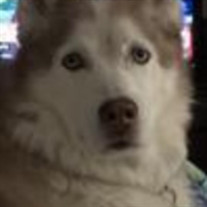 "Rocky was our special boy. He was my husbands pup before I came along, and the first dog I had the privilege to call mine. I brought 3 lady cats into the mix of his 2 doggos, and it was very soon made very clear who was going to be in charge of the house (and it wasn’t the dogs lol) but Rocky, who was 6 at the time, took it all in stride. He actually quickly decided to just try to become (unsuccessfully) one of the girls. He even discovered the joy, and lined up for periodic doses of catnip. He was the family dog. My husband is from Guatemala and has a big family, Rocky was always so happy to see everyone, and everyone loved him. He understood both Spanish and English. He never met a stranger, was a terrible watchdog. He was so empathetic, whenever I was sick in bed, he wouldn’t leave the bedroom. He was always by our side, or laying under our feet. He was much like my husband, a man of few words. He didn’t bark, but he communicated with his eyes. And those eyes were so expressive. His senior years were slow years for him. He developed arthritis and got weak in his hind legs, but his spirits never waned. His last couple months, as he grew weaker, and more tired, and we wondered when it was the right time, he was letting us know there was something more important going on. My in-laws live with us, and for the last four months or so, Rocky spend the evenings napping in the bedroom with my mother-in-law, when normally he would spend them with me waiting for my husband to come to bed. We just thought it was him wanting to spend time with grandma. After a week of not feeling well, she had a sudden turn that sent her to the ER and we found out she had pancreatic cancer. She was in the hospital for a month. Thinking back, Rocky was trying to tell us something was wrong all along. During her hospital stay, Rocky’s appetite declined, and I hoped he was just depressed. After the first 2 weeks, I suspected otherwise. I asked that sweet boy if he could just hang on until his grandma got home, if he was in too much pain, we would help him cross that bridge. That good boy stayed here with us until her 2nd day home when he started having trouble breathing late one night. Our wonderful vet was here within 20 mins to send sweet Rocky to that peaceful place on the other side of the rainbow, where he can play with all the cats, and in as much snow as he wants. Rocky was loyal to the end, he knew we needed him, and he was here. He didn’t want to leave without seeing his grandma again. Such a good boy. We love and miss you sweet pup. I wish you were here everyday, we are lost without you Fufu. The house is so quiet without hearing the tapping of your feet on the floors and the jingle of your collar. Nickname(s): Fufu About Rocky Species: Dog Breed: Siberian Husky Gender: Male Favorite Toy: Favorite Treat: Best Trick: Bilingual Favorite Game: Soccer Favorite Pastime: Sleeping, snacks, trying to play with the cats, going outside (especially when it snowed) Special Skills: Thinking he was a cat, staring into your soul"

"Rocky was our special boy. He was my husbands pup before I came along, and the first dog I had the privilege to call mine. I brought 3 lady cats into the mix of his 2 doggos, and it was very soon made very clear who was going to be in charge... View Obituary & Service Information

The family of Rocky - created this Life Tributes page to make it easy to share your memories.

&quot;Rocky was our special boy. He was my husbands pup before I came...