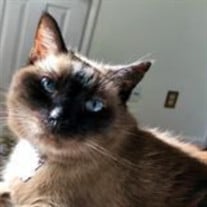 Simon's story is tough but sweet. He was barely surviving in a cat colony as a feral cat. He was trapped, examined & neutered by Fulton County Animal Control, prior to being re released as a feral they noticed Simon was purring and head butting the staff at Animal Control. They realized he was a domestic cat and put him up for adoption. We found his listing on line, and along with our Service K9 Belgium Malinois, we walked into Fulton County Animal Control to adopt him. Simon also suffered a head wound that required treatment, Simon was FIV positive and most likely contracted the virus from the head wound. Simon and our dog Cadence soon became fast friends and were devoted to one another. Simon was Cady's baby. They slept together, ate together, shared a water bowl, they loved to be groomed together, and they liked to tease and chase each other. Simon liked dogs, it was not unusual to find him enjoying the company of Cadence and several of her friends. Possibly due to his experiences as a feral, Simon did not like or ever trust other felines. Simon enjoyed watching bird video's on TV., and rides in the car. When Simon had to say good bye to Cadence a year and a half ago, he spent a lot of time in bed. He felt her loss greatly. Realizing Simon was missing the companionship, we rescued a Shepherd mix dog and they got along fine, they found common ground and became friends, to the point of showing care and concern for one another. Simon was diagnosed with Lymphoma, it came out of nowhere. Our healthy, sweet boy was in trouble and there was nothing we could do to save him. Chemotherapy would only give him 6 months, and the FIV only complicated the outcome. Through my despair and sadness, I am extremely grateful to have been unconditionally loved by this incredible loving and generous cat. He did not possess a mean bone in his body, all of the different doctors and through all of their testing they told me, "Simon is a really sweet cat." I am also angry, angry at the person who did not take care of this gentle precious cat. Who did not vaccinate him. Who did not neuter him. Who did not microchip him. Who did not protect him. He was abandoned, had to fight for survival and contracted FIV. He did not deserved that. Thank God Simon was able to have five years of joy. Simon knew he was loved deeply. That's not a long time for most, but for Simon it's his forever. We love you sweet Simon forever. About Simon Species: Cat Breed: Siamese Gender: Male Favorite Toy: Cat nip filled mouse Favorite Treat: Sushi Best Trick: Would come when called Favorite Game: Being groomed with the dog Favorite Pastime: Snuggling Special Skills: Loved Dogs

Simon's story is tough but sweet. He was barely surviving in a cat colony as a feral cat. He was trapped, examined & neutered by Fulton County Animal Control, prior to being re released as a feral they noticed Simon was purring and head butting... View Obituary & Service Information

The family of Simon created this Life Tributes page to make it easy to share your memories.

Simon&#39;s story is tough but sweet. He was barely surviving in...